Kumon Ranked “Best of the Best” by Entrepreneur Magazine

Teaneck, NJ (May 20, 2015) – In an ever-growing market of after-school learning programs, Kumon continues to lead the industry. As the world’s largest education franchisor, Kumon recently joined a select group of franchises highlighted as the 2015 “Best of the Best” in their industry categories by Entrepreneur Magazine. Among the 101 companies featured, Kumon is one of the 10 largest based on number of franchise units worldwide. With more than 25,000 global units, Kumon ranks third largest on the list. 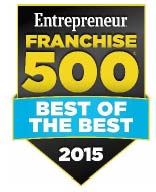 “As a result of our continued growth, the number of business-minded individuals interested in becoming Kumon franchisees is steadily increasing,” said Larry Lambert, vice president of franchise recruitment at Kumon North America. “Our franchise training program in the United States has experienced a participant increase of nearly 15 percent during this year’s cycle as compared to 2014.”

This is the 17th year Kumon has ranked number one in its category on the “Best of the Best” list, which includes holding this standing for 14 consecutive years.

Potential franchise owners will find that Kumon has the lowest start-up franchise and materials fee in the supplemental learning industry – along with a number of financial incentives for franchisees. These include a grand opening marketing subsidy, assistance with leasehold improvements, and purchase of learning centre furniture and exterior primary signage – a total of $19,000 in financial support related to startup costs. The cash investment required for start-up is $70,000-$150,000, with a total investment ranging $64,073 - $134,100.

Kumon is an ideal small business for professionals. Kumon Franchisees must have a four-year college degree, be proficient in math and reading and have investment capital of $70,000 and a net worth of at least $150,000. Founded in 1958, Kumon has four million students enrolled in 26,000 learning centres in 48 countries and regions. Kumon North America is headquartered in Teaneck, N.J. Visit www.kumonfranchise.ca to learn more.